Schiffer Hicks Johnson is proud to announce that partner Adam Dinnell was named to Benchmark Litigation’s 2021 40 & Under Hot List, which recognizes the best and brightest law firm partners under 40 in the United States and Canada. According to Benchmark, the lawyers named to this annual list are “ambitious and accomplished … able to adapt to rapidly changing times … [and] ready to take the reins from previous generations.” Winners were selected based on a rigorous research process that included peer reviews, client feedback, and assessment of key cases. 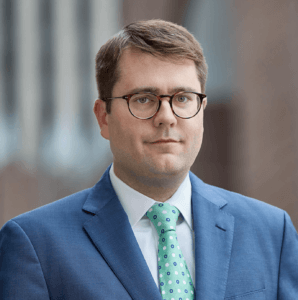 Adam is a former senior trial counsel for the U.S. Department of Justice, Civil Division, who handled some of the highest-profile tort cases of the past decade—including suits related to the Flint water crisis, Hurricane Katrina, and the 2001 anthrax attacks—before he turned 35. Since joining SHJ, Adam has successfully tried several multimillion-dollar cases for leading players in the oil and gas industry; he has also represented companies in major mining disputes, natural gas pipeline disputes, and oil and gas construction projects.